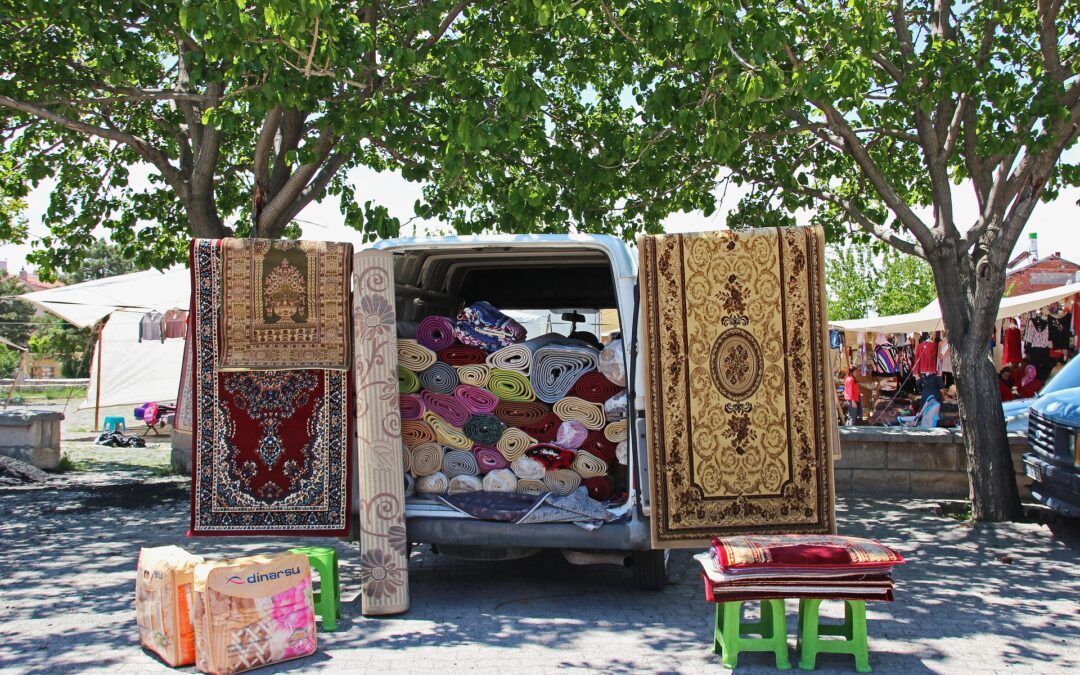 Unlike many other countries, Persian rugs come in hundreds of various styles from all over the country. We thought it could be useful to compile a quick encyclopedia for you to consult if you become lost at sea!

Persian rugs are divided into three categories: city, village, and tribal. They’re all named after the city or hamlet where they were created, or the tribes who created them.

The city rugs are well-known for their superior quality. In Iran, city rug weavers are renowned as ‘master weavers,’ and some of them sign their work as if it were a work of art. Simply put, the majority of city weavers are men, and this is their full-time job and source of income.

The city of Isfahan is located in the centre of Iran (desert to the right and Zagros mountains to the left). It is one of Iran’s most famous tourist destinations, with amazing art, architecture, palaces, and old bridges.

Design: Mosque tile work and imperial gardens are frequently used as inspiration for the patterns. The majority of them have flowery designs. They are noted for having a high knot count and being among the best and highest quality rugs in the country.

Nain is a picturesque city located east of Isfahan. This is where you’ll find some of Iran’s oldest mosques (dating back to the 10th century).

The majority of Nain rugs are flowery in pattern. Ivory, navy blues, light blues, and pinks make up the colour palette. Green and red emerge now and again, but not nearly as regularly as they used to.

Nain rugs come in a number of different quality levels. Standard ‘Nains’ are woven just outside the city limits, yet they are based on well-known Nain motifs.

Nain rugs come in three knot types: 4La, 6La, and 9La for the highest quality and those woven in the city. The word “La” means “layer” in Farsi. This numerical system aids in determining the quality of a Nain rug, since it refers to the number of layers of threads used in each warp-thread during weaving. The finer and denser the carpet’s knots are, the lower the number.

Over the last few years and still today, these have been the most popular style of high-quality Persian rug in the UK. Most likely because the colours used are the most neutral, mild, and unobtrusive.

Location: around 600 kilometres west of Tehran, and one of Iran’s largest cities.

Design: Tabriz rugs typically feature a central medallion surrounded by arabesques and various floral and garden-inspired patterns (cypresses and weeping willows). Tabriz, on the other hand, has one of the most diverse design collections, with medallions, figural, pictorial, and other types among them.

‘Tabriz Mahi’ is the most well-known Tabriz design. The design is inspired by a famous Persian garden with four sections split by a creek. Many fish can be found in the stream. In Farsi, the word ‘Mahi’ means ‘Fish.’

Ghom, Ghome, and Qom are all variations of the same word.

The city of Qum is located around 150 kilometres south of Tehran.

Design: Qum is best recognised for its excellent pure silk rug weaving. These Persian rugs have the highest knot count, and you will never witness greater detail than in these rugs.The designs are so realistic and precise that they appear to be on a high-definition screen! The patterns are inspired by various parts of Iran, but they all include gardens, medallions, and plant and animal themes.